Since the release of Lightseekers’ latest expansion, Uprising, one of the most hotly debated cards in the community has been Cage of Oppression. So, we figured it’d be a good idea to talk about it. 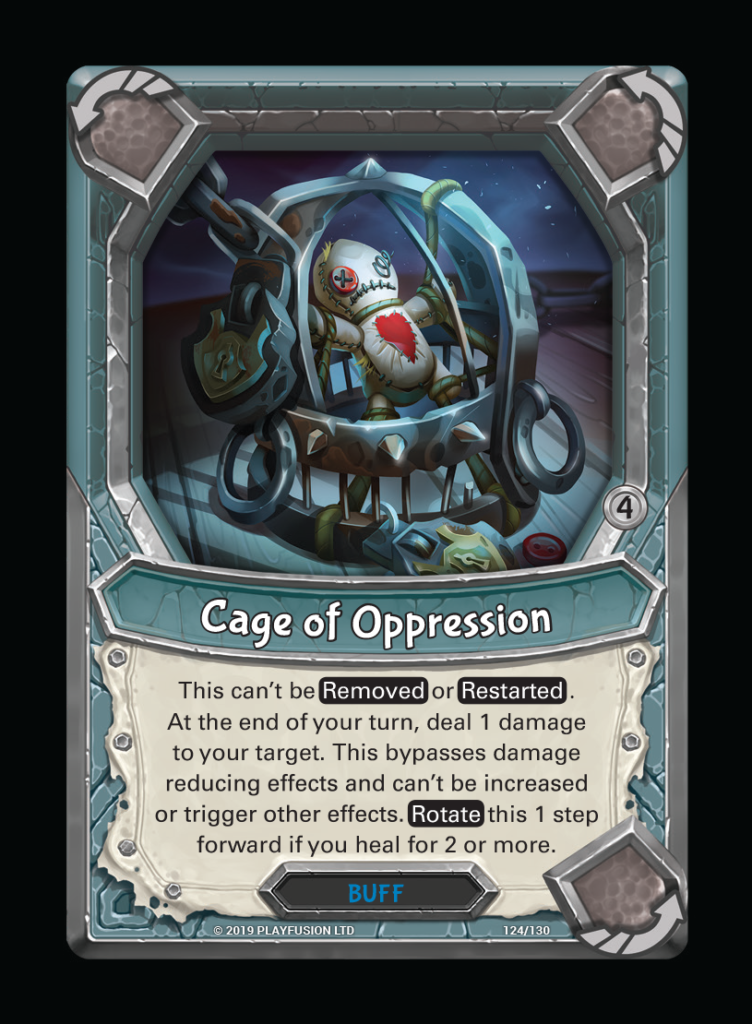 Why did we make Cage of Oppression? What were our intentions behind it?

Objective 1: It should be good into ‘stall decks’.

By ‘stall deck’, we mean a deck where the only objective is to outlast all of the opponent’s cards, without actually trying to reduce their health to 0. Often, these decks aren’t even trying to discard the opponent’s cards proactively, but just aim to be able to take more actions throughout the game. This leads to some very long, and often frustrating and anticlimactic, games. Hence why we want to give players a suitable tool to compete with them.

Objective 2: It can’t be too niche.

This is a mistake we’ve made with counter cards in the past. The cards have been given an effect that is strong into the type of deck it was designed to be strong against, but it’s not strong enough to warrant running into other decks. For example, Draga Hoarder may be a good card into a mill deck, but if the opponent turns out to not be a mill deck, it basically becomes half a card, and the opponent now has an advantage against you. Unless a vast majority of decks you face are mill cards (which is unlikely), it’s simply not a card worth running, so when you finally do come across one, you don’t have the intended tools for the match-up.

Therefore, our second objective for Cage of Oppression was that it needs to be a card that is good enough to also be worthy of consideration into opponents other than ‘stall’.

If it is a card that can fit into most types of decks, what stops stall decks also using it? One thing we wanted to avoid was that a stall deck cuts down to 32 stall cards and 3 Cages, and then simply let the Cages win the game for them while they hide behind their wall of defences and healing.

Objective 4: It can’t be too easily countered.

We wanted to make sure the card is a serious threat into stall decks, and not just something that requires a minor adaptation in order to overcome. This is not necessarily because we want to completely get rid of long lasting decks, but rather that we strive to make as many variations of style match-ups as interesting and exciting to play as possible.

What We Ended Up With

This card went through a lot of design iterations. In fact, more than any card we’ve ever made. From the beginning, we were set on making it about perpetual, but slow, damage. We wanted it to bypass damage reducing effects to avoid that the inevitable damage reduction cards in stall decks simply bought enough turns to easily out-heal the remaining turns’ worth of damage. We also didn’t want it to be able to be removed, as this would be the most obvious way to counter it, and without even needing to make any significant deck alterations.

However, at this stage, all we’ve got is an incredibly strong card with no significant downsides compared to its alternatives. In order to give it some downsides, and also dissuade stall decks themselves from running it, we wanted it to go away if you heal yourself too much. The thinking behind this is that stall decks do a lot of healing, while their lack of damage means that the opponent doesn’t require to do any, and thus won’t cause them to remove their own Cages.

There are also three other quirks about the damage that isn’t often seen in the game: it’s delivered at the end of the turn, it cannot be increased by effects, and it cannot trigger other effects.

We experimented with a lot of different ways the card could deal its damage, how much healing was required, how many corners it would have (if any), etc. We probably had between 15-20 versions of this card before it became what it is now.

The reception of this card has been mixed. Some players love it, some hate it, and some are torn between the two. There have been a lot of people discussing how it might be able to change, if it should change, and how good the card is. Let’s take some time to answer some of these thoughts, comments, and suggestions, and why the card’s numbers are the way they are.

We played with several versions of the card where it was Unique. However, for too many types of decks, it being Unique meant it simply wasn’t enough to effectively play into a stall deck. We don’t want everyone to have to abandon their defensive cards and swap to aggro, just in case they become useless in a stall match-up, so, in the very long run, Cage of Oppression needs to be able to apply enough pressure to make up for the cards in the deck that won’t provide you with any help in these games (i.e. your defences). This ties into objective 2.

“It should have fewer corners.”

If we go down to two corners, Fountain of Time can single-handedly remove Cages in a one-for-one trade, and remain useful in match-ups without Cages due their flexibility. With a single corner, there are all of a sudden many more cards that can instantly counter it (and it really reduces that design space for us). This ties into objective 4.

The exact number of the healing was probably the most hotly debated topic during the design of this card. And, to be completely honest here (and perhaps to your surprise and/or shock), the majority of this discussion ended up between whether it should be 2 or 3, not 1 or 2.

While 1 was played with, it was abandoned pretty quickly, as it severely restricted what kind of defensive cards you can run alongside this card. Cards such as Repair Bot, Stumpdrift Shaman, and Abyss Shade effectively became no-go combinations, and the deck building opportunities shrunk more than we’d like. Instead of making the card feel “fairer”, it simply felt like deck variation was reduced. Much of the debate around whether to take a Tyrax Fixer or a Repair Bot suddenly answered itself, which we didn’t like.

We obviously tried to abuse the healing thresholds we set as much as we could, to see where we thought the card’s breaking point would land. As mentioned, the required healing for one version of the card was in fact 3, but then it became a bit too easy for cards such as Regen Chamber, Grubby Pool, and Rickety Mine to become some pretty viable options for stall to slip under the radar.

This is a variant of objective 2, as far as we’re concerned, only that it cuts out other options instead of itself.

This leads us neatly into a potential follow-up comment…

“But now the 1-healing decks are abusing it!”

There is a fine line between abuse and clever deck-building. Exactly where that line should be drawn can of course be debated (we clearly thought it was between 2 and 3). To some extent, part of what makes deck building in Lightseekers so much fun is to build around those perceived ways to abuse a card. Whether it’s to gain more than the average number of actions off a Chimchu Commander, make a high value corner go off multiple times, repeatedly fast-forward a Power Hoarder, or recycle Bone Reapers; getting more value out of a small set of cards at the cost of other cards in your deck is a big part of what we think makes deck building in this game so much fun. To us, Cage of Oppression isn’t an exception to this rule; we still want cards that you can try to build clever decks around.

“Do you think the card is perfect?”

No, we don’t. This article wouldn’t exist unless the card was either broken or was perceived to be broken, neither of which is perfect. Psychology obviously plays an enormous part into how fun the game is, and if a lot of players feel a card is outright unfair, that is an issue (even if it isn’t unfair), and exactly why we’ve decided to address this card specifically.

The fact that the interaction with the card is relatively one-sided is something that has added to the frustration of some, and a very strong reason for us to keep watching this card, regardless of what we currently think about it. However, rest assured that we are also thinking about more ways to interact with it without necessarily hard countering it. There are of course already some ways in which this can be done (e.g. Chrono Warper, Flamechained Warrior, Gravity Bubble, Pacemaker Brox, Mari Bard, etc.) but more alternatives will come. Again, we strive for diversity in options.

How is Cage of Oppression Performing?

One of the community comments we didn’t represent in the section above is, “you should always run three of this card”. Instead of just saying ‘yes’ or ‘no’, let’s share some numbers with you.

As of right now, decks that play Cage of Oppression in ranked are below 50% win rate, and are, on average, less likely to win than a deck that does not run it.

The average length of a ranked match is about 12.5 turns per player. Cage of Oppression decks don’t really start approaching the 50% win rate value until games last about 15 turns. Even as the game length exceeds 20 turns, the win rate still only fluctuates around 50%. For example, in games that last 15 minutes or longer (an average of 23 turns), Cage of Oppression has a 49.3% win rate. As the game length dips below 10 turns per player (at 8 minutes of average length, which is about 69% of matches), the win rate of Cage of Oppression decks goes down further, to about 45%.

These are of course just averages, but should you blindly put Cage of Oppression into every deck you make? No, we wouldn’t recommend it. Cards should go where they fit, and while there are some deck compositions that include Cages and exceed 50%, that’s also true for many, many other cards.

To clarify on objective 2: we don’t want to say that every single deck should play it, but we do want it to be playable by enough decks that, a) it’s prevalent enough that stall decks don’t automatically rise to the top, and b) it’s not so punishing to your deck that if stall decks do rise again, you can’t put a couple in.

As of right now, we feel like these objectives are being met. But we will of course keep monitoring it.

As always, thanks for all the feedback!