To start off with, let’s first make it clear that we are not opposed to “indefinite sources of damage”, and this by itself is not why Abyss Tentacle was changed. There is a big discussion about what warrants good or bad indefinite damage, but that’s for another time. The reason we changed Abyss Tentacle is because of the rate this damage can be dealt. 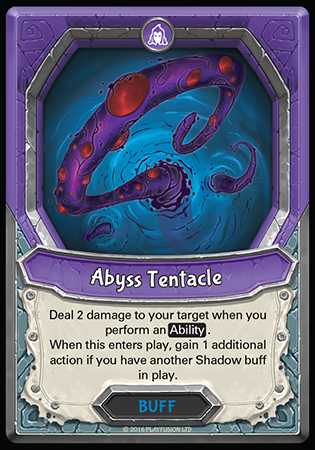 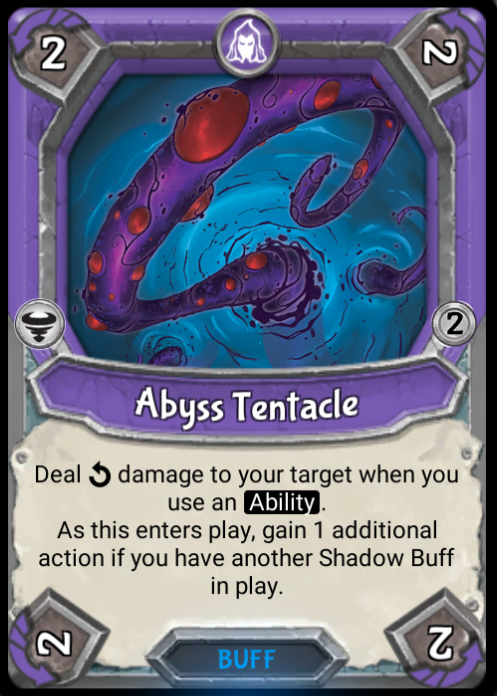 When we design cards, we effectively give them a budget to spend on effects. Negative side effects, strict conditions, waiting times, or which Order it belongs or doesn’t belong to may increase this budget. This factors into the “economy” of the game (how you choose to spend your actions and what return they give; either immediately or over time).

When Abyss Tentacle was first created, Dread did not have very convenient access to Abilities that were immediately “on par” in terms of return on investment. To elaborate on what we mean by this, let’s take a plain damage card, such as Mantix Spitter, as an example. Here is a card that provides 5 damage. To access this 5 damage, you need to first spend one action to draw it and another action to play it. On average, each action provides 2.5 damage for this card. Most Abilities that were available back then did not meet this same average value, so to invest into an Abyss Tentacle’s damage, you had to perform sub-optimal actions.

For example, if you simply use a Hero Ability to ping for 1 damage in order to trigger a tentacle, you only do 3 damage with one action, meaning you very slowly creep back towards the Abyss Tentacle paying itself off. Meanwhile, you are also waiting for the damage, which usually increases the budget even further. If you wanted to increase the value of the Ability itself, you’d have to invest into actions to get such a card into play (e.g. equipping an Item or playing a Buff such as Night Lurker), putting you into a deeper “budget deficit” before you’ve reclaimed the value you’ve invested in and eventually can start reaping profit.

However, since then, new heroes (such as Xile and High Curator Arawn) have given players immediate access to Abilities that are “on par” from the get-go. This means that Abyss Tentacle could much faster get into profit, especially given its potential additional action. This means that the card is no longer the late game card it was intended to be, where you have to work with it for a long time before it overtakes other cards you could’ve played instead. If you also trigger its additional action, a single Abyss Tentacle can now generate 8 damage after only investing 1 action and waiting 3 turns. If we compare to something like a Prism Cannon, the same damage has been dealt, with “up front” benefits and one fewer action, and it can still keep going.

In other words, these ‘on par’ Abilities simply break the economy that Abyss Tentacle was initially designed around.

“But it was the only good thing Dread had going for it!”

We’ve seen a few arguments like these thrown around a lot over the recent weeks. It makes perfect sense why Abyss Tentacle is used in a lot of decks, because it’s mathematically just outright better than most other cards. Some people have argued that Dread required this somewhat over-powered option in order to compete with other Orders.

However, we don’t want Dread to have to play this card to be competitive. All this means is that any new cards in Dread have to be designed around the fact that the deck can also run Abyss Tentacles, so we either need to make weaker cards so that the overall package doesn’t get out of control, or make completely contradicting cards that cannot be used with Abyss Tentacle, but are similarly over-powered in order to warrant any at all attention, and then we just dig an even deeper hole for ourselves.

We also don’t want every other Order to have to constantly build decks that must provide answers for this specific card in order to be competitive; this just spreads these deck building restrictions across even more Orders.

Could we have changed Abyss Tentacle in a different way?

Yep, is the short answer. Abyss Tentacle is a card we’ve looked at for a long time, and we’ve had many discussions about what we could do it, or do to cards that enable it (e.g. give Xile and High Curator Arawn’s Abilities “this can’t trigger other effects”). We’ve also discussed holding off changes until future mechanics let us change it into something similar but different. However, in the end we decided to just go with the most straight forward change and let new cards lead the way with the new mechanics (instead of always just returning to this Awakening card). And we do believe that it is still a very powerful card that can hold a place in many decks, just not the “necessity” it currently feels like.

The other big change from the recent update was that we removed the promotion and demotion series (along with the safety nets) from our Ranked mode.

We had a few different reasons for creating demotions and promotions in the first place. Some of these were to create bigger milestones in progression, more easily solidify where a player “belongs”, and create some tense and exciting moments. This was also when each Ranked season was 2 months long, instead of 1. Since many seasons have passed and they have gotten shorter, players have been faced with more and more of these promotion/demotion series, and they’ve instead become a dreaded point of potential frustration. Many players seem to go into these series not with the excitement of perhaps gaining access to a new league, but instead of fear of having to do it over again. So a successful promotion often results in relief rather than excitement.

Besides, with the seasons being shorter, it has made these add a sense of grind that we don’t really want.

There is an additional benefit of also making it less straightforward to donate ranks to other players through win trading.

And that’s some insight into the recent changes we have made and hopefully gives some perspective on our design thinking! We want to make this a regular series, so let us know if you’d like to see more on our Discord Channel.

Benny and the Design Team