What Lies Beneath Part 1 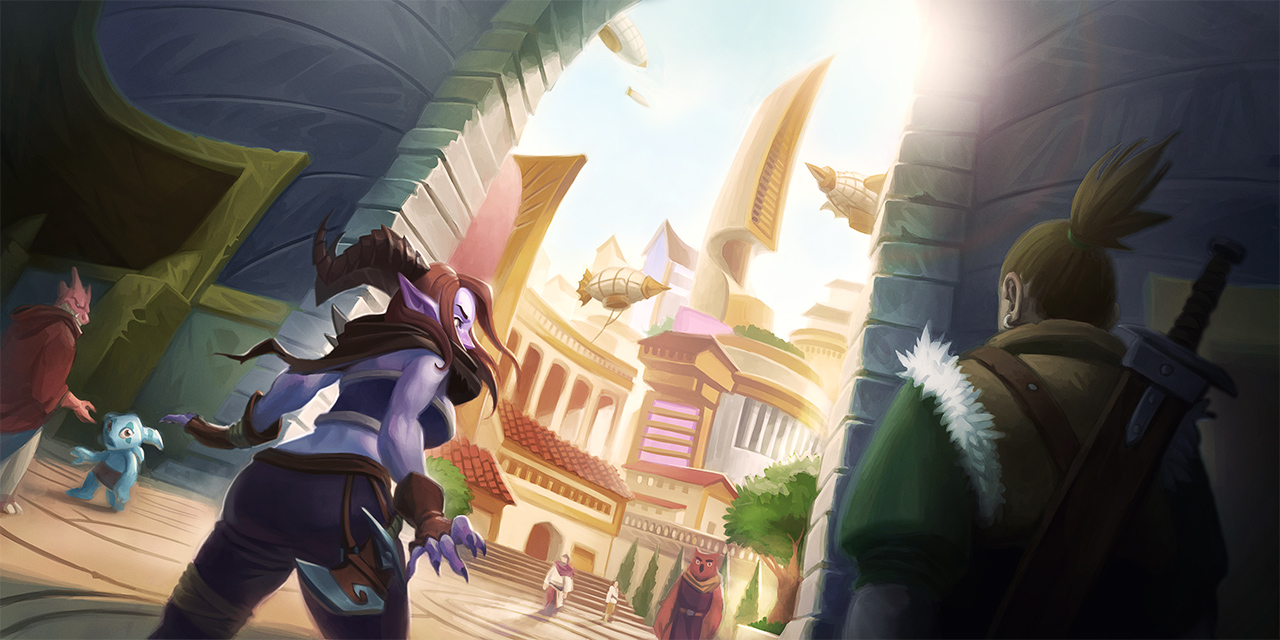 There it stood, a beacon of hope for all the people of Tantos, or so they claimed. Nightshade had never been one to believe the words that poured freely from the mouths of the so-called ‘Council of Elders’ and this place was just another one of their intricately woven lies, a safe haven for all who chose to live as a united people, ridiculous.

As the young assassin approached the overwhelming structure, a sharp intake of breath broke her steely demeanour. However she felt about the secrets held within those walls, there was no doubting the sheer scale of its magnificence.

For over four hundred years it had been the very heart of Tantos. What had started as single tower, a trading post for the less warlike nations had now grown into so much more. Slowly at first, but now shifting and reshaping itself on a near daily basis, as if this great construct was a living creature. At one point this may have been nothing more than that single solitary tower, but that was long ago, now it had become a bustling city, the heart that pumped the very life blood of industry to the furthest corners of this world. This was The Citadel.

As a shadow fell upon the noxin her body instantly relaxed; travelling this far south of the Dreadmire had left the apprentice feeling uneasy. Her training had taught her to always seek out the darkness, to stay where the eyes of the masses did not fall, but here, this place was different. The sun burned with an intensity that was alien to her. The bright white stone that formed the city’s ramparts reflected the sunlight leaving nowhere for a trained killer like herself to hide. Not since her life before had she seen herself so vividly, the many scars that now covered her body told an uneasy story under the harsh light of day.

A moment later and the burning light returned, Nightshade felt her hand tighten on the blade concealed at her waist. Since her rebirth she hadn’t been more than an arms length from WrathBringer, her dearest friend, but soon his protection would mean nothing. Casting her eyes skyward, Nightshade could do little but look on in awe as a great flying machine continued to cast shade over sections of the heaving walkway. Of course she had seen airships before but nothing like this, those ships carried two, maybe three of her brethren, but this machine could hold at least fifty; she couldn’t help but observe how perfectly these contraptions could be repurposed for battle, but here they were, shipping about the inhabitants of this sprawling, urban hub.
At that moment the blimp stopped dead, slowly sinking towards the earth. The sound of creaking wood, of ropes stretching and struggling was clear to her highly tuned sense of hearing. Such a huge object had no right to glide so effortlessly through the sky.

As Nightshade stepped through the mighty gateway that controlled the flow of citizens in and out of the city she felt it, The Citadel’s greatest defence.

It started as a tingling in her fingertips before flowing through the rest of her body; her hearing softened, her vision dimmed. WrathBringer pulsed and screamed in her head, then for the first time in three years, fell silent. Nightshade’s heart began to beat like a hammer determined to burst from her chest, as she felt herself weaken in an instant.

“Relax.” She told herself, “You knew this would happen, the city weakens us all.” But her words brought her no comfort. Dropping to her knees her breathing grew lighter and more erratic, she struggled to catch her breath as all around her others went about their business unaffected.

“First time in the city dear?” A long gnarled hand, wrapped in thin green vines gently found a resting place on the apprentices shoulder, “Just breathe, you’ll be okay.”
Nightshade turned in shock towards an elderly Oakthorn who towered above her. Desperate to escape she clawed her way across the cold stone cobbles, still too weak to stand.
“Get away from me mudeater,” She spat out the words with searing bile.

Wrapping her arms around a door frame she pulled herself uneasily to her feet. By now a crowd had begun to form around the pair.

The young noxin stumbled towards the encircling masses; the faces in the crowd lost in a giant swirling blur. Lunging forward she broke through the crowd sending an unsuspecting mari scrambling across the floor. One step then another, and another; Every heavy impact, an unnatural and cumbersome movement as if her legs were not her own.

She had to escape, to find somewhere to collect herself and complete her mission. She turned down a twisted and overarching passage before squeezing between two tightly knit buildings, the sound of commotion slowly faded into the distance. Finally she found herself alone in a quiet dimly lit alleyway. Gasping for breath, her lungs felt as if they were on fire, the faint taste of copper running down the assassin’s throat. She doubled over, hands on knees and attempted to calm herself.

‘What would Master Icus think if he could see me now?’ She thought. His gruff unyielding voice cut through her thoughts, “Is this who you really are? A scared little girl. After all these years you’re still the weak little creature I found in those slums. I should have left you for the beasts.”

She forced those moments of her past from her mind, as her breathing gradually returned to normal. Tonight she would complete her mission and reveal the Citadel for what it truly was, a castle built upon the sand.